Communication troubles in the post-COVID world 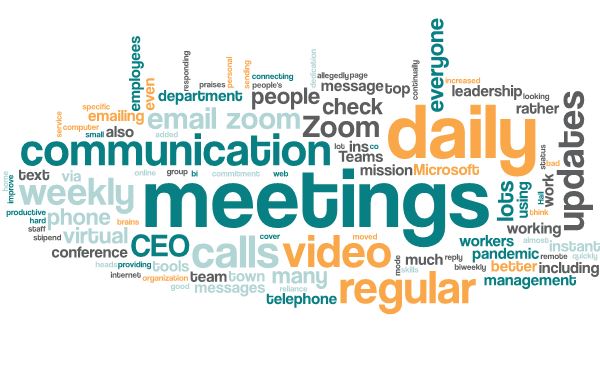 Here’s a surprising fact to come out of the pandemic. A lot of employees don’t believe that communication within their workgroups has suffered. In fact, a big chunk of people believe it’s actually improved.

While that’s great news, there’s also a problem that has popped up. Communication within a specific group may be working, but things are notso great for the people within the rest of the organization.

Late last year I did a survey about how the pandemic has affected workplace communication. 225 people responded to my six-question survey. Here are the highlights: 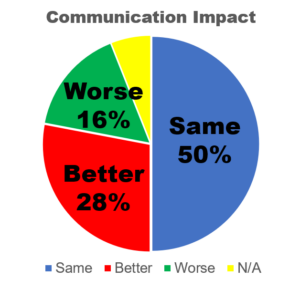 The optimist would look at the results and talk about how the American workplace has survived a fundamental shift in spectacular fashion. The pessimist might argue that people were in survival mode and happy that any communication was happening.

I’ll stand right in the middle. I think we should stop and pat ourselves on the back for figuring out how to keep things going. But we also need to recognize there are still some weak points and that we’ll need to stay vigilant to avoid slipping back into some of our old communication habits. After all, the old workplace had plenty of communication issues so we need to figure out how to move forward and make things better.

When I asked people to be specific about what was working it quickly became obvious that it’s a combination of technology and effort. Virtual meetings (mostly using Zoom) were mentioned over and over as an effective tool. Daily status meetings are common while updates from the CEO are happening more often. Here are some selected comments:

When I asked what wasn’t working well, there were two common themes.

First, people absolutely miss seeing co-workers in the office. For some it’s the social element of saying hello in the hallway or lunchroom. For others, it’s the impromptu conversations that can often spark an idea or creative moment. Second, quite a few people mentioned that while the communication within a particular group has improved, they feel less connected to others in their organization. Here are some selected comments:

In reading through the full set of comments, it’s obvious that while many managers have done a great job of adapting, there are others who have not. And while many people are willing to praise the surge of Zoom meetings, others feel it’s a burden.

Just for the record, this was not a scientific survey. While those who responded were spread across a broad spectrum of geography, industries and experience at their current organization, it wasn’t a truly randomized survey. Still, I feel that the results are a good indication of what I was already hearing.

So, take a moment to congratulate yourself and those you work with. We’ve endured a monumental change in the way we work and thus far the results have been very positive. We just need to remember that virtual meetings are not a replacement for human interaction and that we probably need to work a little harder to make sure our inter-departmental communication is working.