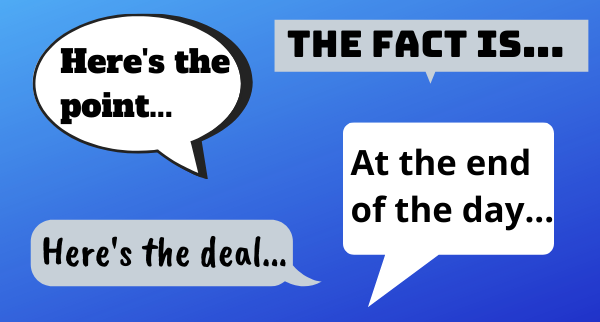 I recently heard a presentation from the CEO of a large service organization. It was a great chance for him to tell the story about the great things they’re doing. Unfortunately, I was extremely distracted during his entire speech. All I noticed was that every sentence seemed to have two or three “umms” stuffed in the middle. In my mind he was completely unprepared for his presentation.

People who study language call them filler phrases, words or sounds. We all use them. They’re tidbits that we seamlessly drop into conversations without our even noticing. Sometimes it’s at the beginning of statement. That’s where you’ll find fillers like, “It’s funny…” or “At the end of the day…” It could be in mid-sentence. That’s when you’ll hear “you know” or “like” popping up quite often.

During the 2020 democratic presidential debates, The Wall Street Journal declared future President Joe Biden was the winner with 5.6 filler phrases for every 1,000 words he spoke. Ironically, second place was his future running mate, then Senator Kamala Harris. We can only assume that means four years of fillers.

Some filler phrases are used for a specific purpose. Saying things like “The point is” or “Here’s the deal” are designed to focus attention on the words that follow. Others seem to have no purpose at all. Words that randomly land in the middle of a sentence like “well” or an occasional “so”.

Speech researchers include filler phrases in a category they call disfluency. They sit beside long pauses, false starts and slips of the tongue. Essentially, they’re words that get in the way of fluent speech. But does that mean they’re bad? The answer isn’t simple.

There’s plenty of data to show that filler phrases get in the way of an effective message.

Researchers Jamie Pytko and Laura Reese found speakers who use fillers were considered less prepared and less effective. Another study, by Mortor Research and Gweek, had 2,000 people listen to two speeches. One was loaded with real facts and lots of filler phrases. The other had fake information but no extra fillers.  The listeners, by a wide margin, thought the person who didn’t use filler phrases was more educated, had better people skills and was even more attractive! The facts were lost in style.

So why do we use them?

On study by by Goldwater, Jurafsky, and Manning found two primary causes. The first was when people used words that weren’t normally a part of their speech. It’s as if their brain wanted a brief pause before inserting a new word. Not surprisingly, the second cause was simply people speaking too quickly. They used filler words to plug the void until they found the right word.

There are some positive reasons. For example, using a filler phrase like “What I’m trying to say…” or “At the end of the day…” gives our mind a moment to think about the best way to phrase something. It allows you to maintain control of the conversation while you come up with just the right words to make your point. The filler phrase can also add emphasis by drawing attention to the words that follow. That assumes, of course, that you’re not using too many filler phrases or the same ones over and over.

One Australian research project found that people who say “um” might be a little more honest. That’s because a rehearsed sentence is usually said without any fillers. But if the words are coming out for the first time, your brain is adding “ums” to keep it flowing and you might not have enough time to come up with a fitting fib.

Filler phrases and words become a problem when they’re overused.

They turn into a conversation crutch. The word “like” is a good example. We all know that person who seems to throw it into every other sentence. Talking about “the bottom line” can add significance, but not if it’s used multiple times during one conversation.

So, how do you walk that fine line? First, you have to know what phrases you’re overusing. You probably don’t even notice them, but the people around you might. Ask someone you trust if they hear a particular comment from you over and over. Next time you have a presentation, make a recording. Keep a count of how many filler phrases or words you use. Once you know them, listen for those words in your own speech. Last year I started noticing that I would often start a statement with “It’s funny…” In fact, it really wasn’t funny. It was just a crutch. But once I identified the words, it was amazing how many times I was able to catch myself before saying them.

Ideally, the best thing to do is drop the filler and insert a pause. Don’t feel like you must fill every second. Pauses give you a chance to gather your next thought. It also allows your audience a moment to process what you just said. Of course, you have to avoid overusing pauses as well.

One other tip is to work hard at relaxing during your presentation to slow down your speech. Rehearsing can help. Making sure you’re not trying to cram too much information into the allotted time is another idea. Remember that most audiences are rooting for you. They want you to do well so don’t worry about how they’re judging you. Anything that settles your nerves will help reduce the fillers.

“Filler phrases” are a lot like cookies or ice cream. Using them a little is just fine. Too much and suddenly it’s hard to take you seriously.