Here’s an Idea: Have a Point! 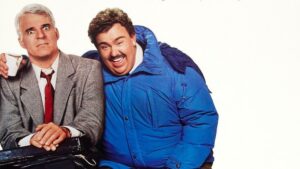 One of my favorite movies is Planes, Trains and Automobiles starring Steve Martin and John Candy. It’s the story of two hapless travelers trying to get back to Chicago for Thanksgiving. Without giving too much away it involves canceled flights, broken-down trains and burning cars. It’s your basic holiday nightmare. Of course, it ends wonderfully and will leave you thankful for your Thanksgiving meal with family.

In one scene about midway through the movie, Steve Martin has had enough of his traveling companion. In a biting and sarcastic monologue, he rips into John Candy’s rambling anecdotes, saying:

“Here’s a good idea: Have a point! It makes it so much more interesting for the listener!”

You can watch the clip here.

While I wouldn’t want to have been on the receiving end of Martin’s tongue lashing, he does have an important message that people need to remember. Whether it’s a sales presentation or an elevator conversation, make sure you know your point. Don’t just keep throwing numbers up on a PowerPoint. Don’t drift off into areas that don’t support your primary message. Have a point and know how you’re going to get there.

One of those quotes that floats around the internet (usually on LinkedIn or Facebook with an artful background) is from a lady named Renee Blodget who is billed as a curator, branding consultant, travel writer, photographer, connector. It says, “I am all for conversations, but you need to have a message.” The concept seems incredibly simple, but it’s something so many people forget.

Oh, they might start with a message. But by the time they’ve added on all the sales charts, cutesy dog pictures and random quotes stolen from the internet, things are getting a little muddy. Worse yet, perhaps they aren’t absolutely sure of their own message so they’re hoping that a few bells and whistles will distract the audience.

How much time for your story?

And make sure you know how much time you have to make your point. If it’s a story you’re telling in the elevator, you’d better make it quick. If you’re the lone presenter and the audience has already scheduled its next hour around your message, you can let it breathe.

But don’t abuse that additional time. I used to work in TV news. We were always battling over the length of a story. The reporter (who might only have one story that day) always wanted more time, and the producer (who had to fit 17 other stories into the half hour newscast) was always giving less time. One day, a random person in the newsroom (who did not go on to become a famous blogger and have quotes plastered all over the internet) made a great comment that I remember to this day. They said, “It’s not that our stories are too long. It’s that our short stories are too long.”

In other words, if a story is good for one minute, then that’s what it should get. But if the message is so good that it deserves more, then the time should grow. Just because you’re scheduled to go 30 minutes doesn’t mean you need to take the entire time. Figure out how long it will take to effectively make your point and then call it quits.

Rambling on after you’ve given your message just to fill the allotted time can sometimes only confuse the issue. People have a limited attention span and memory. Throw too much at them and they’ll likely leave with less than you intended. Don’t throw enough, and you’ll just leave them wondering why you told them half a story.

Are you that guy?

We all know those rambling story tellers that corner us at events and go on and one with some inane story about nothing. We roll our eyes as we walk away thinking thank goodness we’re not that guy. The problem is that too many of us actually are that guy. We just don’t see it in ourselves.

So the next time you tell a story, imagine Steve Martin is listening and wondering all the while, “What’s your point?”